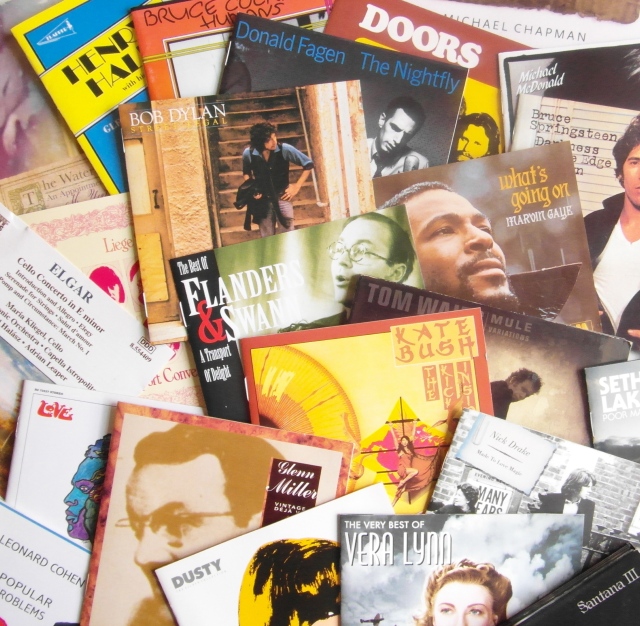 Music features a great deal in Deadlines. It is another enduring passion embracing rock, folk, blues, jazz, country, soul, sacred, classical and some opera. Many of the tales in the book have a musical soundtrack in my mind. Glenn Miller`s Moonlight Serenade sends me to some wartime airfield more than 10 years before I was even born. Michael McDonald invokes Oxford, Donald Fagen`s The Nightfly and Elvis Costello`s Imperial Bedroom were among the soundtrack for the move to Cornwall, Handel`s Air from the Water Music Suite conjures up sunsets across old airfields on hills like Little Rissington and Binbrook……..

The English writer Aldous Huxley wrote: `After silence, that which comes nearest to expressing the inexpressible is music.`

This is the Deadlines  jukebox, reflecting some of the music scattered throughout the book………….

Charlie Chaplin leaned forward when he walked.  Jacques Tati`s Monsieur Hulot leaned back. Rowan Atkinson has credited Hulot with some of Mr Bean`s mannerisms. `Monsieur Hulot`s Holiday` is one of my favourite films – something new emerges every time you watch it (Ch 3)

Al Stewart – Life and Life Only

The `Bolton Bullfrog` started off as a folk singer in the 1960s but is also a fine actor and comedian. He has appeared in Phoenix Nights, Emmerdale, Coronation Street, Last of the Summer Wine, Coogan`s Run and many more. He often ended his music gigs with a raucous version of `Nellie the Elephant`.

The Christian beach mission group had exuberantly treated us to `Michael Rowed the Boat Ashore` and `Mine eyes have seen the Glory` and were now singing something more unusual, more challenging. The chorus was about the answer vaguely blowin` in the wind. Someone said it was new out of the United States by a folk singer called Bob Dylan.  I have stuck with the singer since the mid-60s and enjoy the vast Bootlegs Series which keep on coming. The next selection is out in February 2021 and covers more unreleased tracks from 1970. His album Rough and Rowdy Ways was the Album of the Year for many publications last year.

The E Street Band in full flight with an elegant and emotional sax solo in Jungleland by Clarence Clemons. If I Should Fall Behind has the band assembled around one microphone in a moving finale. I saw them at Earls Court a few months earlier. Last saw him at the Ethiad Stadium in the rain in 2016. Springsteen continues to deliver at 71, with the critically acclaimed Western Stars album and film released in the past 18 months and Letter to You which came out in October 2020, recorded with the E Street Band in just four days. He has also been doing radio shows, playing music from his own personal collection and musing on the times we live in.

Central Band of the Royal Air Force – RAF March Past

Stirring stuff. Add The Dambusters March, Reach for the Sky, 633 Squadron, Battle of Britain and Angels One Five. They were heard a great deal in 2018 – the centenary year of the Royal Air Force.

It is all about an early hours radio dj in the late 1950s and from the album of the same name – Fagen`s first solo LP away from Steely Dan.

The Doobies were always a favourite before, during and after Michael McDonalds time with them.  McDonald`s voice was first heard on Steely Dan records before he transformed the sound of the Doobie Brothers. His last solo outing was Wide Open, released in 2017.

The double LP `History of Fairport Convention` was a constant backdrop to my year in Darlington on the print journalism course, along with Santana`s `Caravanserai`.

The Glenn Miller Story film was always evocative with the backdrop of war and young American men making the most of dance nights before they were called early the next morning for daylight bombing raids over Germany. The disappearance of Glenn Miller on a flight from Bedfordshire to Paris in December 1944 remains a mystery. Was it a fault with the aircraft or were they hit by bombs being jettisoned by returning Allied aircraft high above them?

Gordon Lightfoot – The Wreck of the Edmund Fitzgerald (see Debrief)

The Canadian`s majestic tribute to the 29 crew of the SS Edmund Fitzgerald which sank in a huge storm over Lake Superior in November 1975. Like Wellington Z1110, none of the crew on board were ever recovered.

`The legend lives on from the Chippewa on down,  Of the big lake they call ‘gitche gumee’,

Superior, they said, never gives up her dead,  When the gales of November come early`

Dad`s favourite bandleader as a teenager in the 1930s. He tried to make sense of my teenage music but it was a world away from what he grew up with.  The late 1960s was a heady time with the BBC`s `Top of the Pops` at the centre of school day discussions. `I bet they don`t even know what they are singing about,` guffawed the Vicar of Filey as the Rolling Stones scampered through `Honky Tonk Women`. Hmm, I thought….. Parents queried what sort of name for a band was `Pink Floyd` (drawn from the names of two old blues singers actually) and, although they liked the bit of Bach in Procol Harum`s `A Whiter Shade of Pale`, what was all that about sixteen vestal virgins heading for the coast?

My parents were never quite sure what to make of this new music although Dad tried hard. He liked the Simon and Garfunkel song `Cecilia` from the `Bridge over Troubled Water` album but why, oh why, did they have to have the verse about `making love in the afternoon, upstairs in my bedroom, I get up to wash my face, when I come back to bed someone`s taken my place`.  Turned out nice again, Vicar.

`I know you’ve heard it’s over now and war must surely come,
The cities they are broke in half and the middle men are gone.
But let me ask you one more time, O children of the dusk,
All these hunters who are shrieking now oh do they speak for us?`

Written in the mid-1960s.  In 2020, the cities are broke in half and the extremists seem to dominate.  And the shriekers claim to speak for us all. Leonard Cohen died in November 2016 aged 82. His last three albums (Old Ideas, Popular Problems and You Want It Darker) were extraordinary. Another one has been released posthumously, called Thanks for the Dance.

One of the television journalists on the Malaysia trip (Chapter 9 Cotswold Radar) was another BBC man, Clarence Mitchell, who was with `Look North` at Leeds. Years later and out of the BBC, he was the media spokesman for Gerry and Kate McCann in their search for their missing daughter Madeleine.

`Among the Missing` was recorded by Michael McDonald and Kathy Mattea in 1999. It was released to raise awareness of an American charity looking for missing children and supporting their parents. The writer of this song was also called McCann – Peter McCann from Nashville who wrote songs for Kenny Rogers, Whitney Houston, Isaac Hayes, Buck Owens, Julio Iglesias and many others. When McDonald sings the line `Cause every time the phone rings, I think the worst and best things` in `Among the Missing`, you can cue a shiver and a momentary hint of how things are for any parent whose child is missing.

Another parent who has endured the disappearance of her child is Kerry Needham from Sheffield. Her son Ben disappeared on the Greek island of Kos in 1991 not long before his second birthday. At BBC Radio Lincolnshire, we covered the story in some depth as Kerry`s parents (thus Ben`s grandparents) lived at Chapel St Leonards near Skegness. This was before the internet, mobile phones and social media. The story got nothing like the publicity afforded to the McCann`s more than 15 years later when their daughter disappeared in Portugal. As I write, both Madeleine and Ben are still `among the missing`.

Miles Davis – So What & In a Silent Way

Miles embraced many styles…like Bob Dylan, he chopped and changed and thrilled and infuriated through bebop, fusion, rock and just `jazz` whatever that is…. 1959 found him with one of his classic bands including another jazz legend John Coltrane….check out Coltrane`s A Love Supreme and Cannonball Adderley and pianist Bill Evans. So what…? With tenor and alto saxophones and Miles on trumpet, the music breathed. There was no clutter….the spaces between the notes were just as important as the notes themselves. It proved that music did not have to be frenetic to hit home and touch the soul…it was elegant, stylish, mysteriously profound, and set you thinking. You can listen to Kind of Blue on a sunny Sunday morning and on a dark winter night as the rain lashes against the window…a timeless, reflective, quiet, emotional soundtrack to troubled times.

Paul Simon – Train in the Distance

Rory Gallagher – I could`ve had religion (Live in Europe 1972)

There were three music fans on my print journalism course in Darlington in 1972/73. We had endless discussions in The Green Dragon about the merits of Roxy Music, Rory Gallagher and Santana (me). I was brought round to the music of Rory G very quickly. He died in June 1995 of liver failure aged only 47. There is a life-size bronze statue of him in the centre of  Ballyshannon in County Donegal.

Sandy Denny – Who knows where the time goes?  (see Fairport and Ch 25)

Tom Petty – A Face in the Crowd   (see Outtakes/Updates)

The Waterboys – Piper at the Gates of Dawn

Yes, from Kenneth Graham`s Wind in the Willows! Mike Scott intones word for word the central description of Mole and Rat`s quasi-religious experience on the river at dawn. Sounds as though it could be trite and corny but it is not. It works. It brings to life that central experience in the book whose title has also been borrowed by the Pink Floyd for their debut album and by Van Morrison on his The Healing Game album.

I first saw The Who a few months after the Isle of Wight Festival when, on a cold December evening, they came to The Futurist Theatre on the sea front at Scarborough. Not quite Woodstock or East Afton Down but it was the first really big name rock band that I had seen `live`. I was tucked away in `The Gods` way up at the back but still closer to the stage than most people would have been at those two iconic festivals.

My mum and elder sister came to pick me up and appeared at an open door near the stage. Some of the exits had been opened for those who wanted to miss the rush but I was determined to stay to the end. Thus my Mum and 13 year old Alison peered in to the theatre and were told by a security guard that they could move into the front row as the band was nearly finished for that night.

This experience left a lasting impression on the wife of the Vicar of Filey. The Who were coming to the thunderous climax of their show with Pete Townshend`s windmilling arm thrashing through the chords, Roger Daltrey swinging his microphone wider and faster and Keith Moon enveloped in a blizzard of drumsticks. And it was certainly the loudest noise that Mrs Curtis had heard since German bombs fell on Sunderland before she was evacuated. 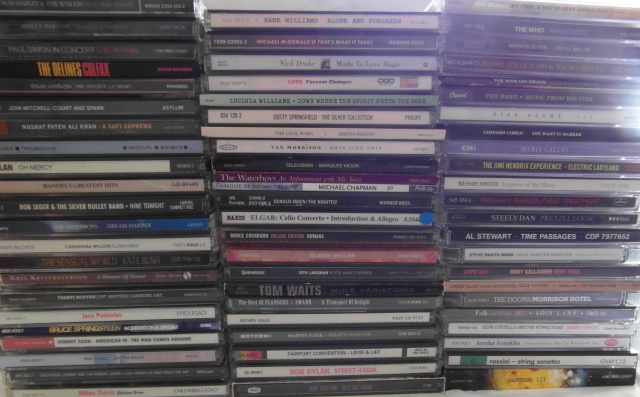