A C-5 Galaxy (perfectly and accidently) framed by the right wing of a C-17 Globemaster lands at Mildenhall circa 1997 – Chapter 23 (Photo: MC) 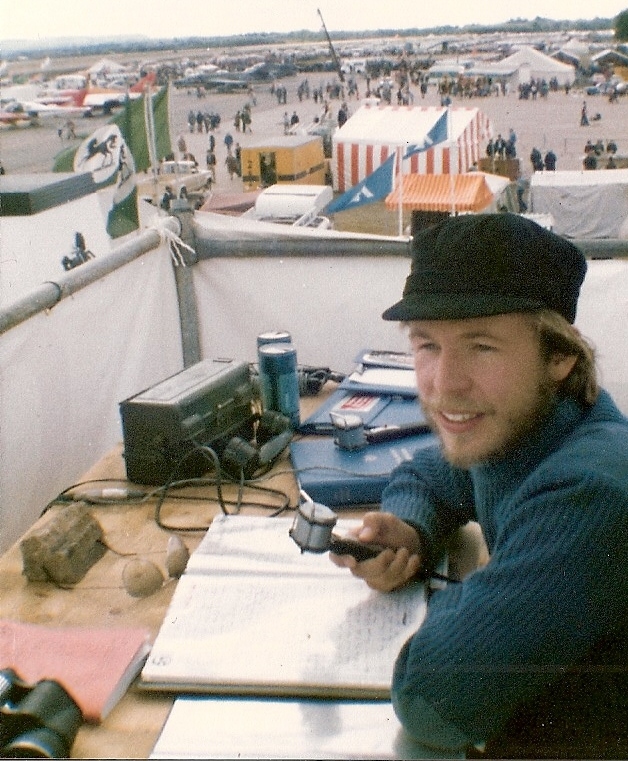 Our man on the IAT commentary tower with a lip-mic, a phone link to the control tower, two cans of lager (gifts for visiting display team commentators), and a small rock paper-weight (Chapter 26). Corduroy caps, as seen on the cover of Bob Dylan`s debut album (Chapter 15), were very fashionable in 1981 (Editor: Are you sure?) 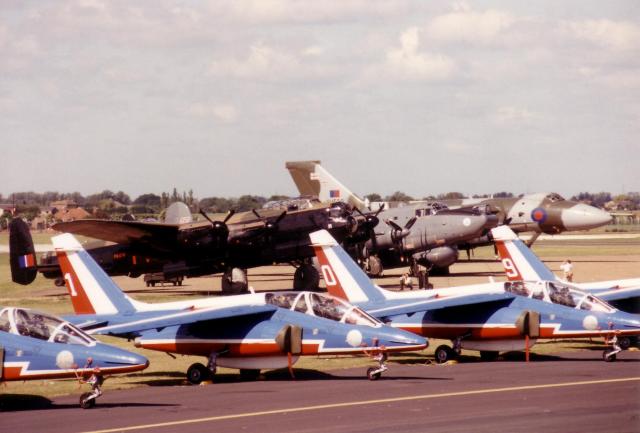 Airshow encapsulated! A youngster trains his binoculars on an RAF Buccaneer, waving its old carrier folding wings, as it taxis past the bins, barriers and tannoys after completing its display, RAF Finningley circa 1990. Buccaneer crash and local heroism – story in Chapter 17. (Photo: MC) 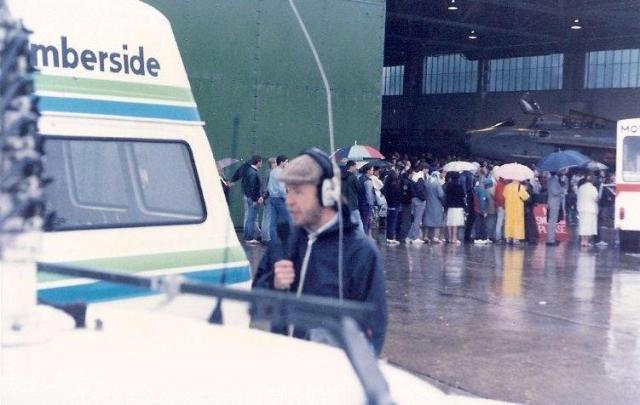 `Why do BIRDS suddenly appear…….` (with apologies to Karen C & Alan P) MC serenades the ice cream queue at a rain-lashed Binbrook sporting a flat cap held on with headphones. Hmm..or I could just be doing a report for BBC Radio Humberside on The Last, Last Lightning Show in August 1987 (Chapter 5). One of Binbrook`s finest can be seen in the hangar.

`Somewhere in that misty morning light, there`s another brand new start`. Early start for some photographers at a Mildenhall Air Fete who are allowed near the warbirds on the right. On the other side of the runway, a C-5 Galaxy and a B-52 await their slots later in the day – see Chapter 23 (Photo: MC)

Tightening…….Seven of the Reds captured over Scampton during winter training in March 2017 (Photo: MC)

A BAC 1-11 of the Defence Research Agency takes off at the end of a trade day at the Farnborough Air Show circa 1988. An RAF Hercules waits to line up. Two of the Reds Hawks can be seen on the dispersal in front of the famous Black Sheds, explained in Chapter 14. (Photo: MC)

Always an evocative sight and shape, Concorde emerges from the early morning mist to offer a treat to the early starters at RIAT at Fairford 1996 (Chapter 26). Much of the British flight testing on Concorde was done out of Fairford. RIAT has now been cancelled for the second year running because of the Covid pandemic. 2021 is the 50th anniversary of the Air Tattoo and the organisers have published an excellent book about its history.  Link to RIAT under Connections. (Photo: MC)

A Nimrod tucks up its undercarriage straight after take-off at a Mildenhall Air Fete circa 1986. The smoke below is not coming down from the aircraft but rising up from the American BBQs doing all-day burgers for the crowds. See Chapters 10 & 23 (Photo: MC) 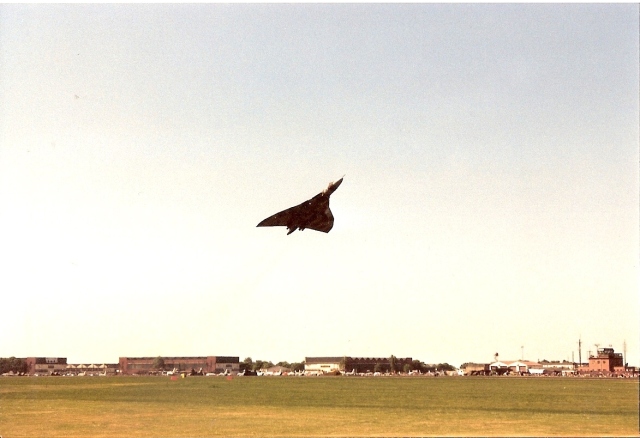 Howling at the sky. The last flying Vulcan gets airborne at the Mildenhall Air Fete in 1987 when it was still on the RAF`s books. See Chapters 2 & 23 (Photo: MC)

Cover of Punch magazine circa 1981