A B52 wheels over the Las Vegas skyline as it lines up to land at Nellis Air Force base in Nevada in October 1992 – see Chapter 14. Groundcrew work on one of the Coningsby Tornados which were at Nellis for the Red Flag exercises. (Photo: MC) 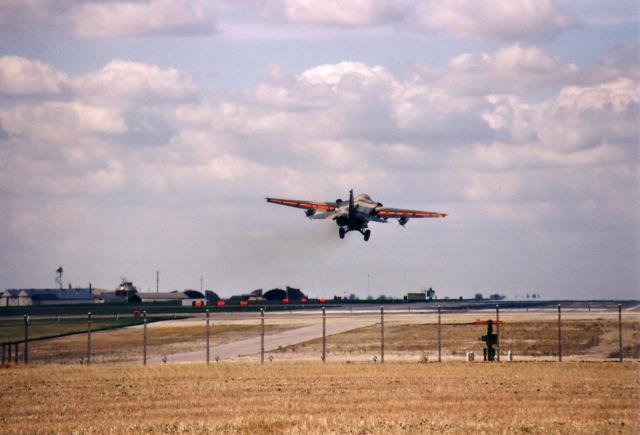 `It`s an aardvark! Can`t you see that, your Highness, it`s a bloody aardvark!` (with apologies to Edmund Blackadder and the Prince Regent).  An F-111E Aardvark on finals to Upper Heyford circa 1982 – see Chapter 9 (Photo: MC)

Yes, it`s a gate. Great Gates of the World no.94.  Crash Gate 2 at Binbrook with the hangars in the background. A dead-end road with the Lightning lay-by, beloved of enthusiasts until the Lightnings left in 1988 – read Chapter 5. (Photo: MC)

Red Arrows Hawk XX306 – the aircraft in which MC had a flight from Scampton to Norfolk n` back in 1992. The aircraft was brought out of storage and installed as gate guardian at Scampton in 2015.  I hope it follows the Reds to their new base which has been named as Waddington from 2022, although it seems the team will continue to use the Scampton airspace for practising their routines. See Chapter 22 (Photo: MC)

I wouldn`t hang about here too long if I were you…. Looking towards the Laffan`s Plain end of Farnborough`s runway. A helicopter is on final approach to the temporary heliport on the left, set up for the Farnborough air show. It was on this runway and in this direction that The Blue Diamonds and The Tigers staged that memorable stream take-off in 1962 – see Chapter 14 (Photo: MC)

A Chipmunk trainer – now in civilian hands – taxies out for take off at the end of a Waddington airshow in the 1990s. Like many air cadets, a young MC did his first aerobatics in a Chipmunk – see Chapter 3 (photo MC)

Hangars on the Horizon. The old hangars of RAF Binbrook seen from the road to Stainton-in-the-Vale. The QRA sheds that housed two Lightnings at the end of Runway 21 can be seen to the left – read Chapter 5 (Photo: MC)

The old control tower at Greenham Common, home to the commentary team and the air traffic controllers at the International Air Tattoo circa 1980 – see Chapter 26. This photo was taken in 2013. In September 2018, the building was opened as a visitor centre and community hub with the aim to preserve and share the historical legacy of one of the few remaining airfield buildings – see Connections (Photo: MC) 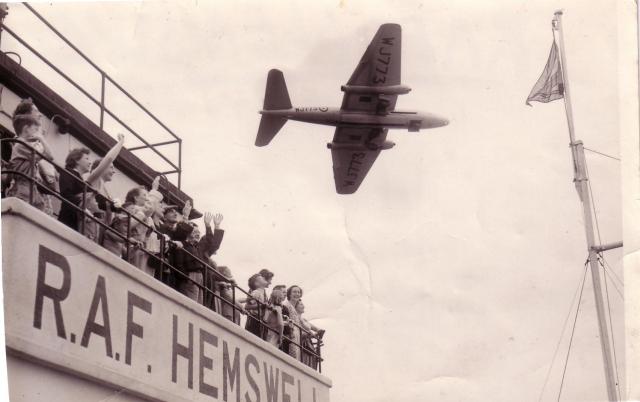 Canberra from 139 Squadron overflies its home base at RAF Hemswell in Lincolnshire. It was setting off on an overseas tour in the mid-1950s 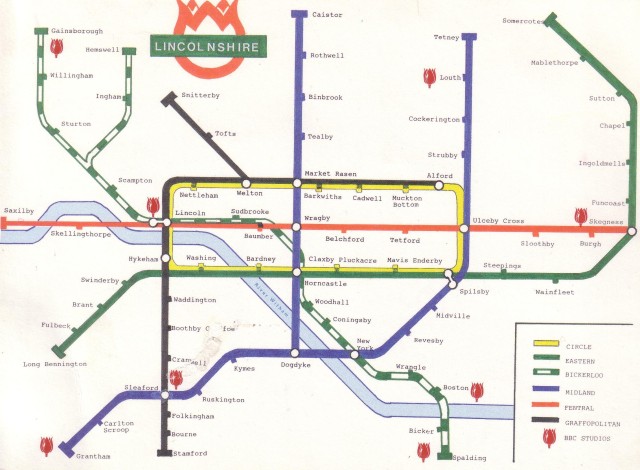 The Underground map of Lincolnshire, put together by MC and Sonia Haines circa 1988. I endeavoured to include all the RAF airfields as well as the villages with interesting names – Chapter 11. Boothby Graffoe and Cranwell have suffered some collateral damage. The map got used as the radio station Christmas card that year. I get out more these days………..